For Panthers, the Paul Maurice era gets underway at camp 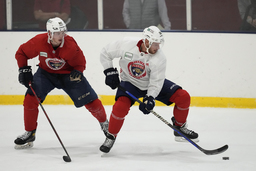 CORAL SPRINGS, Fla. (AP) The Florida Panthers have been through exactly one day of practice. Preseason games start next week. The regular season starts next month and goes until mid-April. The grind is just beginning.

The Maurice era started Thursday with the first day of training camp, with more than 50 players split into two on-ice sessions. The new coach immediately set the tone for the team's expectations - a Stanley Cup - and started to instill what he believes is the right mindset from the outset.

"There's no point in practicing for something that's not going to happen. ... But how we practice and how we prepare has to be related to that, because it's a challenge for every team to make the playoffs," Maurice said. "Shocks you to say that, but it's true. This is a difficult sport, and we have to prepare for that."

It was his official debut, as well as the one for new Florida forward Matthew Tkachuk, the prize of the Panthers' offseason who came to the team in a trade that sent Jonathan Huberdeau and MacKenzie Weegar to Calgary.

Tkachuk was all smiles after his first practice.

"There's a lot of new pieces here," Tkachuk said. "There's new everything. And, you know, me coming in as a new guy, I actually feel more comfortable with a new coaching staff because everybody's in the same boat, trying to get caught up to speed on what they want and what the expectations are. And I think they're pretty clear that they're going to be very intense practices. It's just a very professional attitude around here."

Maurice's system will not bring massive change to the Panthers, because there's no need for it. Florida had the best record in the NHL last season, winning the Presidents' Trophy for the first time, but got swept in the second round of the playoffs by rival Tampa Bay.

They were a good team last season. They might have the pieces now to become a great team. But they aren't a championship team yet. And changing that is clearly Maurice's top priority, so there's no reason to wait until March or April to start that process.

"I think it's great," defenseman Radko Gudas said. "He understands the game so well, that he knows that the things we've been doing are working and sees the things that aren't working. And he saw the way we exited the playoffs last year and he certainly doesn't want to do that this year. So, he said right away, from the start, the things he wants the team to be working on."