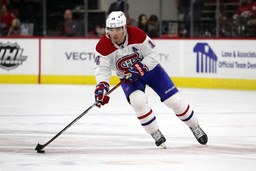 Coalition Avenir Quebec leader Francois Legault said the Habs made an "excellent choice," describing the center as one of the team's best players, before adding that Suzuki now has to learn French.

The Canadiens announced the appointment of the 23-year-old Ontario native as the team's captain on Monday. He has played for the Canadiens for three seasons after being acquired from Las Vegas in a trade.

Liberal Leader Dominique Anglade told reporters it would be a good thing if Suzuki learned French, adding that living in Quebec is an opportunity to learn the language. Parti Quebecois Leader Paul St-Pierre Plamondon described Suzuki as a "very good choice" for captain but added that it is important for the Habs captain to learn French because the position involves a bond with a Quebec fan base that has supported the team for generations.

"It's a true honor for me and a privilege," Suzuki told reporters before the comments from the party leaders. "This team's headed in a great direction, and I couldn't be more excited to be the captain and represent the team. It means a lot, just to see the respect the management, teammates, (and) coaches have for me. I know it's a big role, but I think I'm ready for it."

Playing all 82 games last season, Suzuki led the Canadiens in scoring with 21 goals and 40 assists for 61 points. Those totals were all career highs, though the team finished last in the Eastern Conference in a season marred by injury.

"There's been a lot of highs and lows, a lot of learning experiences," said Suzuki, whose great-grandparents emigrated to Canada from Japan. "I think I've got to handle each situation really well, just lead by example again. It's a privilege to have that pressure on you. We want to win hockey games and that's the biggest reason we're here."