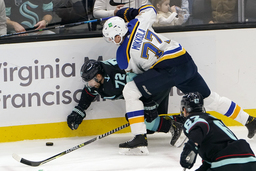 The Blues have won two straight and five of six. Bozak and Brayden Schenn scored in the first period, and Pavel Buchnevich, Colton Parayko and Jordan Kyrou scored in the third. Parayko's goal came on a penalty shot.

"I'm just feeling good right now, every time I get a chance to play, I try to get a win," said Husso, who also was in the net for a 2-1 home win against the Kraken on Jan. 13. "There was a lot of blocking shots. I have to give credit to the defensemen and the forwards."

The Kraken were shut out for the second time this season and ended a two-game winning streak. Joey Daccord had 26 saves.

Both of St. Louis' first-period goals came from its special teams.

Bozak put the Blues on the board with a short-handed tally at 5:54, finishing a 2-on-1 break with Brandon Saad for his second goal this season.

St. Louis made it 2-0 with Schenn's power-play tally at 10:23. Schenn found the rebound from David Perron's shot and tucked it in for his eighth goal.

"Our special teams were really good in that first period," Blues coach Craig Berube said. "I thought we were energized and skating well and doing some good things. When you get a short-handed goal, it's a huge lift. It's all work-based."

Buchnevich, who returned on Friday from COVID-19 protocols, added an insurance goal for St. Louis just 24 seconds into the third period, his 15th.

Parayko was awarded a penalty shot at 7:40 when he was hooked from behind by Jordan Eberle. Parayko skated toward the right and lofted his shot over Daccord for his fifth. It was the first penalty shot by a Blues defenseman since Feb. 3, 1985.

Although the Kraken came from behind for their two wins earlier this week, defenseman Mark Giordano said they can't count on that every time.

"At the end of the day, getting behind in this league, it's way too hard to come back night in and night out," Girodano said. "Especially against a team that's as structured as they are. They're not going to give you anything if you don't generate it. You saw that in the third period, they're really good at shutting down anything off the rush."

Buchnevich played Friday after clearing the league's COVID-19 protocols but won't be able to play Sunday at Vancouver because of Canada's stricter rules. The NHL and NHLPA allow players to return following a five-day quarantine and two negative tests. However, Canada doesn't permit anyone into the country if they are within 10 days of a positive test. Sunday would mark 10 days from Buchnevich's positive. He'll join the team Monday for a game at Calgary.

NOTES: Bozak's goal was his first point in 14 games. ... The short-handed goal was the sixth of the season for the Blues and the third allowed by Seattle. ... St. Louis leads the NHL with 34 power-play goals. ... Daccord made his fourth appearance and third start for Seattle. He was called up from AHL Charlotte on Tuesday when Chris Driedger entered COVID-19 protocols. ... This was the sixth of 15 back-to-back sets for the Kraken and was their third split. They lost both games of the other three.

Blues: Play at the Vancouver Canucks on Sunday night.