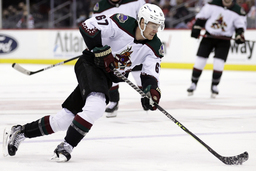 NEWARK, N.J. (AP) Lawson Crouse scored a goal and added an assist, and Karel Vejmelka made 35 saves to help lead the Arizona Coyotes to a 4-1 win over the New Jersey Devils on Wednesday night.

"The one thing we knew about our team when we started training camp was (that) we had a lot of players with a chip on their shoulder," Arizona coach Andre Tourigny said. "Players who wanted to either (bounce) back or prove themselves."

Mackenzie Blackwood stopped 13 of 17 shots and Nico Hischier had the lone goal for New Jersey, which has dropped four of its last five.

It was not one the seventh-place team in the Metropolitan Division will remember fondly, even if New Jersey did lead 1-0 after the first period thanks to Hischier's power-play goal 6:09 into the game.

The sequence began when All-Star selection Jack Hughes blew past Janis Moser, but had his backhand attempt knocked away. Jesper Bratt corralled the loose puck and found Hischier, who beat Vejmelka with a wrist shot.

Hischier's eighth goal of the season was one of 12 shots the Devils were credited with in the first, while Arizona's lone attempt came off Ilya Lyubushkin's stick with 1:07 left the period.

"We did a lot of good stuff," Devils coach Lindy Ruff said. "If the message wasn't there, we wouldn't have come out the way we did."

Arizona drew even at 1 on Mayo's third of the season at 6:50 of the second period. Crouse put the Coyotes ahead with his 10th of the season 4:42 later.

Boyd extended the lead to 3-1 by deflecting Clayton Keller's attempt past Blackwood at 14:13.

"We just had a little more urgency," Arizona defenseman Jakob Chychrun said, when asked of the difference between the Coyotes' first and second periods. "We were skating better."

Any comeback hopes New Jersey had were snuffed out when Larsson converted Crouse's feed 8:27 into the third.

"They're really good off rush (plays) but don't sustain a lot of (offensive zone time) and we knew that, and we were trying to be quick in the (defensive zone) and once we did that, we had the puck a lot more often," Chychrun said. "That's when you can play with the puck and generate offense."

What irked the Devils is that they outplayed the Coyotes for much of the game. New Jersey finished with an 36-17 advantage in shots on goal and out-attempted Arizona 66-43. The Devils also went 1 for 2 on the man advantage and killed both Coyotes power plays.

"It's completely on us," New Jersey defenseman Ryan Graves said. "We didn't manage the game very well and it's on us."

The NHL announced before the game revisions to schedule in order for the league's 32 teams to conclude their regular seasons by April 29. Both the Devils and Coyotes were among the teams whose schedules were reconfigured as New Jersey had eight games moved and Arizona six.

The Devils and Coyotes' rosters were buoyed by the additions of Blackwood and Chychrun, respectively. Blackwood made his first start since Jan. 8 after being removed from New Jersey's COVID-19 protocol Monday, while Chychrun had missed Arizona's previous 11 games with an upper-body injury, as well as having spent time in protocol.