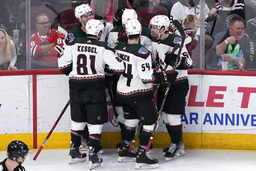 The win was only struggling Arizona's second in the last nine games (2-6-1). The slumping Blackhawks lost their fifth straight (0-3-2) after a two-game winning streak.

"It's fortunate that one goes in, but I was trying to pass it," Gostisbehere said. "Hey, it happens."

"Every day seems like Groundhog Day right now," Blackhawks interim coach Derek King said. "In the second period, I don't know if we were tired or not, we shut our brains off and let them take the lead. It was a good thing we turned them back on."

Lankinen, who stopped 32 shots, made the two best saves in the five-minute overtime, stopping Phil Kessel with a stick save and Barrett Hayton with a glove deflection within seconds of each other with about a minute to go. Then came Gostisbehere's shot.

"It was a tough bounce, obviously." Lankinen said. "Hopefully we'll get a bounce in the next few games here."

Kane tied the game at 2 at 5:33 of the third period with his 22nd goal and 80th point of the season, firing a 50-foot wrist shot through traffic and past Coyotes goaltender Karel Vejmelka with the Blackhawks on the power play.

Carcone tied the game at 1 early in the second period, beating Lankinen over the shoulder with a redirection from the slot. Anton Stralman fed Carcone the puck from the right boards.

"That was huge the way we played," Arizona coach Andre Tourigny said. "The win will kind of cap off everything, but we were way more in sync."

Boyd gave Arizona a 2-1 lead midway through the second, his wrist shot sailing over Lankinen's right shoulder after four Blackhawks failed to check him en route to the slot.

"I thought about shooting it and saw the defenders move toward that (fake) pass," Boyd said. "I ended up getting a little bit of space to shoot it."

Strome put the Blackhawks ahead 1:13 into the game, wristing the puck past Vejmelka from the slot after winger Alex DeBrincat created a turnover.

"It doesn't seem like just one thing," Toews said of what's gone wrong the last five games. "We're coming back from a road trip, and we know we're not going to have our legs. But we're not putting people in good positions."

NOTES: Chicago C Jonathan Toews, who played his 1,000th NHL game at Tampa Bay on Thursday, was honored before the game. He was given the traditional silver stick and lauded by former teammates, including former goaltender Corey Crawford and winger Marian Hossa, in video tributes. . Arizona LW Andrew Ladd returned to the lineup after missing 18 games with a lower-body injury. . The Blackhawks named Chris Vosters, 30, their new television play-by-play announcer, replacing the retiring Pat Foley.

Chicago continues a five-game home stand with Seattle on Thursday and Dallas on Sunday.