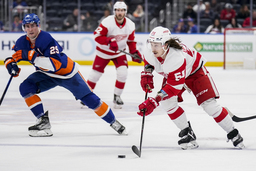 Anthony Beauvillier had a goal just nine seconds in, the second-fastest score to start a game in Islanders history. Oliver Wahlstrom and Josh Bailey also scored for New York, which improved to 8-4-1 overall since March 1 and 7-1-1 in its last nine games. Anders Lee had three assists and Mathew Barzal added two, giving him a team-leading 30.

"We're just having fun," Nelson said. "We're reading what the game presents, reading the plays off one another and being confident."

Pius Suter and Sam Gagner scored for the Red Wings, who won the previous two meetings this season in Detroit - 4-3 in overtime on Dec. 4 and 2-1 on Dec. 14.

The Islanders got on the scoreboard quickly when Beauvillier beat former Islanders teammate Thomas Greiss from in front just nine seconds in. Only Bryan Trottier's score five seconds into New York's game against Boston on March 22, 1984, was faster.

"It was a good start. We'll take that any day of the week,? Islanders coach Barry Trotz said.

Greiss made 13 saves before being replaced by Alex Nedeljkovic to start the third period after suffering an upper body injury in a collision late in the second period. Wahlstrom was assessed an interference penalty on the play. Greiss was playing the Islanders for the first since joining Detroit as a free agent before last season. Nedeljkovic made eight saves in relief.

Wahlstrom had made it 2-0 at 16:07 of the first, beating Greiss from the left circle for his 12th goal after a pretty set up from Barzal.

"I'm trying to use my size and make more plays," said Wahlstrom, who is thriving in recent games playing on a line with the speedy Barzal. "That's the main goal."

The Red Wings held a 13-5 shots advantage after the first, mostly due to their chances on a failed 5-on-3 advantage late in the period.

"Obviously, when you get scored on off the opening draw, that's a kick," Red Wings coach Jeff Blashill said. "And you want to score at any point on a 5-on-3. It's not a team you want to go down 2-0 to. They are a hard team to come back against. They are tenacious."

Nelson scored his team-leading 29th goal at 14:07 of the third before Gagner completed the scoring at 15:18. Nelson, who has 10 goals in his last 12 games, leads the Islanders with 44 points.

"I think 30 is a pretty good benchmark. That would be special," added Nelson, whose previous career high was 26 goals. "Hopefully I will get that and keep going,"

NOTES: The Islanders have scored first in 14 of the last 18 games after allowing the opening goal in 11 of their previous 12 contests. ... Lee has 16 points - 10 goals and six assists - in his last 10 games. ... The Islanders announced F Cal Clutterbuck would have shoulder surgery and miss the rest of the season. Clutterbuck signed a two-year contract extension earlier this week. ... The Islanders also said D Scott Mayfield, who had played all 61 games this season, will miss 4-to-6 weeks because of a lower-body injury. ... The Islanders scratched F Ross Johnston. ... The Red Wings scratched forwards Filip Zadina and Givani Smith, and defenseman Olli Juolevi.

Greiss, a fan favorite, received a loud ovation and heard sustained chants of "Greis-ser! Greis-ser!" during a video tribute at 6:37 of the first period. Greiss acknowledged the crowd at UBS Arena, waving with his gloved hand. Greiss was 101-60-17 during five seasons with the Islanders, and also won 14 playoff games.