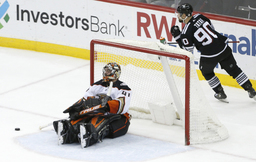 NEWARK, N.J. (AP) In the past couple of weeks, Nico Daws has staked a claim as the New Jersey Devils' No. 1 goaltender.

Daws made 33 saves and stopped two Anaheim shootout attempts to lead the Devils to a 2-1 victory over the Ducks on Saturday night.

Daws has been impressive the past seven days in winning three of the four games on the just completed home stand, allowing eight goals. The 21-year-old has started the last seven games and he is 6-4 on the season.

"We've been given that opportunity to just keep playing him through games, and if there was a game he didn't like, I guess he knows he's going to play," Devils coach Lindy Ruff said. "I think that's a good feeling for a goaltender. I think a goaltender always worries if he has a bad game and if he is going to go back in. We've allowed him to kind of take the ball run with it."

Daws is getting the chance because New Jersey top goaltenders Mackenzie Blackwood and Jonathan Bernier are hurt and probably out for the season.

"He's been a huge part of our team right now," said Tomas Tatar, who scored in regulation and the shootout along with Jesper Bratt. "He's making some key saves. He's standing very tall for us."

Daws, playing in his first shootout, stopped Trevor Zegras and Troy Terry in the tiebreaker.

"Shootouts are a lot of fun for me, and I enjoy them," Daws said of his first in the NHL. "I don't really think about it too much. I just go and try to make saves, and that's really all there is to it."

Tatar scored on a backhander on the Devils' first shot, and Bratt beat Anthony Stolarz with a forehand shot after a nice move.

"I made the first move on both of them and kind of made it easy for them," said Stolarz, who finished with 39 saves. "Obviously not the way you want to go out for a goalie going 0-for-2 but overall I thought I played well and felt really good out there."

Terry scored for Anaheim, which has lost six of their last eight games.

Terry gave the Ducks a 1-0 with 8:58 left in the first period with his 28th goal. He took a cross-ice pass from Max Comtois and beat Daws with a shot from the top of the right circle to the top left-hand corner of the net.

Tatar tied the it early in the second period with his 11th goal. Jesper Boqvist set it up, stealing the puck at the Devils' blue line and feeding Tatar for a shot in close to cap a 2-on-1 break.

Both goaltenders came up big in the third period to keep the game tied.

Stolarz stopped Pavel Zacha on a short-handed attempt and Dawson Mercer in close twice. He stopped Jack Hughes in close in the overtime.

"The boys were on tonight for sure," Ducks defensive Josh Manson said of the goalies. "I mean, we tested their goalie pretty good, he made some good saves and (Stolarz) was there for everything we need him to be."

NOTES: Ruff passed Al Arbour for fifth on the NHL games coached list with 1,608. ... Ducks general manager Pat Verbeek was the Devils' first 40-goal scorer when he had a career-high 46 goals in 1987-88. ... Manson (upper body) played for the first time since Jan. 29 and had an assist on the first goal. ... Rookie D Jamie Drysdale missed his first game of the season. He was a healthy scratch after being a minus-7 in the last two games.

Ducks: At New York Islanders on Sunday night in the fourth game of a five-game trip.