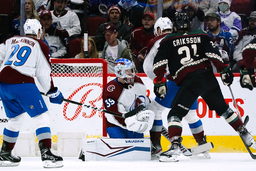 GLENDALE, Ariz. (AP) The NHL's worst team looked anything but against the league's best squad this season.

In four games this season, the Coyotes - last in the NHL with 34 points even with the victory after Montreal also won Thursday night - tallied five points against the Avalanche, including wins in the last two games.

No, unfortunately for them. And luckily for Colorado, which has 84 points and is the second-fastest team to 40 wins in NHL history - but struggled against Arizona.

Schmaltz's goal at 5:27 of the third period broke a 1-1 tie. He beat Pavel Francouz with a backhander, and that was just enough with Vejmelka coming up big all night.

"We had great goaltending," Tourigny said. "We played with a lot of urgency and pride defensively, every game, and for whatever reason we're confident. They're not easy to play against because they have the puck a lot, so it's tough to create offense against them. We were able to contain them as much as we could."

Between the Olympic break and the solid play of Scott Wedgewood, Vejmelka hadn't played since Feb. 17. But he didn't lack sharpness.

"He works hard every day. He has the same approach and routine," Tourigny said.

Loui Eriksson also had a goal for the Coyotes, who handed the Avalanche their first loss after scoring first this season. They had been 30-0-3. The Coyotes are also one of only three teams to win in Denver this season.

Devon Toews scored the lone goal for Colorado, beating Vejmelka through some traffic to open the scoring 5:48 into the second period.

Avalanche coach Jared Bednar would have liked to have seen more of that.

"They defended hard. Their goalie had a really good night," Bednar said. "We probably didn't make it difficult enough on the goalie to take away his vision. But I thought we played pretty good."

"They played us hard in all the games. They capitalized on a higher percentage of their scoring chances. They played us tough, you've got to give them credit. I did not think we took them lightly."

Mikko Rantanen, who had six shots but no points, agreed with his coach.

"I don't think we were bad today," Rantanen said. "There were some breakdowns, we had some really good chances. But their goalie was making good saves. That's hockey sometimes."

With 3.5 seconds left, after Vejmelka's final save of the night, the teams tangled.

Colorado's Nathan MacKinnon and Arizona's Dysin Mayo got into it and were penalized for fighting, with Mayo getting a double-minor to MacKinnon's minor to give Colorado a man advantage. But Arizona won the faceoff and the game ended without further incident. Chychrun and the Avalanche's Gabriel Landeskog also drew five-minute penalties.

Avalanche goaltender Darcy Kuemper had the night off against his former team. Kuemper has 27 wins already this season, tying his career best that he set with Arizona in 2018-19.

Colorado is 12-1-4 in one-goal games this season, losing one for the first time Thursday night.

Matias Maccelli played in his first NHL game Thursday. The 21-year-old from Finland was called up from Tucson to replace Andrew Ladd who was placed on injured reserve.

"What I really liked about his game tonight was his play without the puck," Tourigny said. "He cut plays in our zone, he was good on the breakout. He was really good for us."