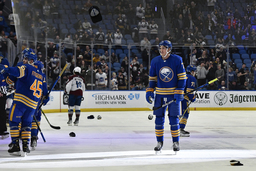 BUFFALO, N.Y. (AP) Mikko Rantanen scored a goal and assisted on Alex Newhook's tiebreaking goal in the third period, and the NHL-leading Colorado Avalanche beat the Buffalo Sabres 5-3 on Saturday.

Nathan MacKinnon also had a goal and an assist, J.T. Compher and Nazem Kadri scored the other goals, and Colorado extended its season-best road win streak to seven. With consecutive wins to open a four-game trip, the Avalanche improved to 8-0-1 in their past nine road games and 24-2-2 overall since Dec. 6.

"It's something we talked about earlier on in the year, because I think when we got going at home, we were only .500 on the road," Avalanche coach Jared Bednar said. "Now to be able to string together seven in a row at a tough time in the year, I think it kind of shows that we can play our game, not just in our building, but on the road as well."

Darcy Kuemper made 29 saves to earn a point in his 18th consecutive decision (16-0-2), prolonging a franchise record.

Tage Thompson netted his first hat trick for the Sabres, who have lost two in a row and fell to 8-14-4 at home. Jeff Skinner had two assists and Dustin Tokarski stopped 31 shots.

"Obviously the end result's not what we want," Thompson said. "But I thought we played a full 60, and we played the right way. And that's what you've got to do every night. Now it's just about finding that consistency, being able to do it every game."

Rantanen set up Newhook in the slot for the go-ahead goal. It was Newhook's 11th, coming on a rush after Erik Johnson knocked down Buffalo's Rasmus Dahlin behind the Avalanche net.

"A little broken 3-on-2, and great pass by Mikko," Newhook said. "I was lucky to put it in the back there."

The sequence drew boos from the crowd as Dahlin was slow to get up from the ice before going to the dressing room. The All-Star defenseman returned later in the period and delivered a big hit to Colorado's Andre Burakovsky.

Rantanen scored his 26th in the empty net with 52 seconds left in the game.

Fans tossed their hats on the ice for the first time in Buffalo this season after Thompson tied it up on a wrist shot from the high slot with 7:06 left in the second period. Kuemper stopped Skinner on a breakaway shortly before Mattias Samuelsson set up Thompson for his 19th goal.

"It's a cool experience, for sure," Thompson said. "You grow up and you want to play in the NHL, and those are the little dreams you have."

The Avalanche scored three times within 10 minutes during a frenetic first period, and had quick responses to a pair of Sabres goals.

After Skinner set up Thompson 2:50 into the game to break Kuemper's shutout streak at 146 minutes, 56 seconds, Cal Makar fed MacKinnon for his 11th goal 35 seconds later.

Compher scored the second goal for Colorado, his eighth, on a strong drive to the net with 8:42 to go in the first. Kadri's 21st gave the Avalanche a 3-2 lead just 20 seconds after Skinner connected with Thompson again with 7:18 left in the period.

"There's plenty to clean up," Compher said. "We realized that we don't want to play as high-even hockey as we did in the first. And if we limit turnovers at the blue lines early in this game, I think we handle it a little better."

Avalanche: Their seven-game road win streak is tied for the second-longest in franchise history behind a nine-game run from Feb. 2-March 4, 2020. They also won seven in a row from Jan. 10 to Feb. 7, 1999. ... Improved to 22-0-0 when leading after the first period. ... Makar's assist gave him 50 points in 45 games, matching the third-year defenseman's career-high total set in 57 rookie appearances. ... D Ryan Murray replaced Kurtis MacDermid in the lineup after he was a healthy scratch in the previous three games.

Sabres: F Casey Mittelstadt returned to play in his eighth game of the season after missing five with an upper-body injury. ... Samuelsson returned to the lineup in place of Robert Hagg and recorded his first point in 12 games. Buffalo has been rotating its seven healthy defensemen. ... Skinner scored four times in a 5-3 win at Montreal on Sunday for the team's first hat trick of the season.

Avalanche: At Boston on Monday.

Sabres: At Columbus on Sunday to begin a five-game trip.