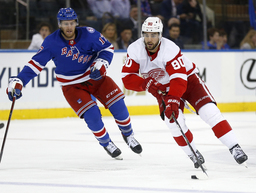 NEW YORK (AP) Pius Suter scored the winner in the sixth round of the shootout, and Thomas Greiss made 37 saves as the Detroit Red Wings beat the New York Rangers 3-2 Thursday night.

Detroit's Lucas Raymond and the Rangers Mika Zibanjead scored in the first round of the shootout, and each team then missed its next four chances. Suter beat Igor Shesterkin and Rangers forward Filip Chytil failed to convert to give the visitors the victory.

Troy Stecher and Dylan Larkin scored for Detroit, which won for the fourth time in six games.

"We had to find a way to get the extra point and we did," Red Wings coach Jeff Blashill said. "We got a road win against a real good team in a great environment."

K'Andre Miller and Mika Zibanejad scored in regulation for the Rangers, who are 16-4-3 at home and had their three-game winning streak halted. Shesterkin made 31 saves.

"The second half of the game, I liked our game, but the first half we came out real flat obviously and Detroit took it to us," Rangers coach Gerald Gallant said. "We probably got the one point we deserved, but no more."

The Red Wings were clinging to a 2-1 lead when Zibanejad tied the game with a power-play goal at 11:51 of the third. Adam Fox and Artemi Panarin assisted on Zibanejad's 19th goal of the season and 11th on the power-play. Zibanejad has points in five of his last six games.

Shesterkin made a sterling glove save on Larkin with 40 seconds left to force the contest to overtime.

Greiss stopped Zibanejad twice early in overtime. Shesterkin made an acrobatic stop on Tyler Bertuzzi to keep the action going at Madison Square Garden, where the Rangers are 8-1-2 in their last 11 games.

"You don't win in this league without really good goaltending," Blashill added. "Greisser gave us that."

Greiss improved to 8-7-1 this season, his second with the Red Wings. The 36-year-old German-born netminder often had success against the Rangers during his five seasons with the rival Islanders.

"I like playing against them," Greiss said. "A good atmosphere. It's always fun. They are a good team obviously."

Larkin put Detroit ahead at 13:48 of the second 90 seconds after Miller tied the game for the first time.

Stecher opened the scoring at 2:18 of the first when his long shot from inside the blue line eluded Shesterkin. The goal was the first this season for Stecher, who was playing only his ninth game. Adam Erne assisted.

Miller, who scored the shootout winner against Boston on Tuesday, tied the contest on a wraparound at 12:18 of the second. The goal was the fourth of the season for Miller. Goodrow registered the lone assist.

"We still need to work on starting games better," Goodrow said. "Right from the beginning, we were chasing from behind. If we played the first 20 like the last 40, we would been in a better spot."

Larkin put the visitors ahead again at 13:48 with his team-leading 26th goal. Larkin has 10 goals in his 12 games and 16 goals in his last 22 contests overall. Defense partners Danny DeKeyser and rookie Moritz Seider assisted.

"He's on another gear," Blashill said of Larkin, who has a team-best 52 points. "He's been a guy who shows up every night."

In the third, Greiss denied Alexis Lafreniere's one-timer two minutes into the stanza and a point-blank shot by Ryan Reaves from the right circle four minutes later, before Zibanejad beat him with a one-timer from the left circle.

Former Rangers defenseman Marc Staal, who played 892 games for the team over 13 seasons and myriad playoff appearances, returned to Madison Square Garden for the first time since he was traded to Detroit in September 2020. The 35-year-old Staal waved to the Garden crowd from the Red Wings bench following a video tribute and loud ovation early in the first period.

Rangers coach Gerard Gallant, who played nine seasons and scored 30-plus goals four straight seasons with Detroit, has fond memories of his tenure with the Red Wings during the 1980s. "I loved my time in Detroit. I loved every minute," Gallant said before the game. "I was proud to be a Detroit Red Wing, proud to get drafted into that organization. I still have a lot of good friends there, obviously teammates like Stevie Yzerman and some of those guys. It was great."