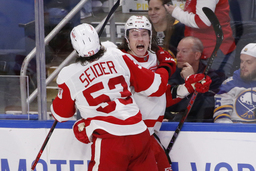 Rookies had a hand in all of the Red Wings goals. Lucas Raymond, the fourth overall pick in the 2020 draft, recorded three assists to go along Seider's winner.

Detroit also got a goal and an assist from Pius Suter in snapping a four-game skid. Alex Nedeljkovic made 29 saves in the finale of a four-game trip during which the Red Wings were outscored 13-5 in three regulation losses.

"We had nothing to save it for," Seider said. "It was the last game on this road trip. We wanted to get home with something. So everyone contributed to that win tonight and everyone was fighting for it."

Rasmus Dahlin scored his first goal of the season for the Sabres, who have lost four in a row following a 5-1-1 start.

"It's a learning process," said Dahlin, the first overall pick in 2018. "We just got to see what we can do better and work on it. There's a lot of young guys in there. We have to understand how to win and prevent them from scoring."

Tage Thompson and Arttu Ruotslainen had the other goals, and Rasmus Asplund had two assists to extend his point streak to six games. Dustin Tokarski stopped 29 shots.

Bertuzzi scored twice 1:30 apart to bring the Red Wings back late in the third period. After beating Tokarski with a wrist shot from the right circle, Bertuzzi scored his eight of the season with 5:06 left in regulation, finishing from the front of the net on a feed from Suter to tie it 3-3.

"He is the type of guy who is bringing energy to the team," Seider said. "And I think that's just what we needed in that moment."

In the overtime, Bertuzzi stole the puck from Thompson in the offensive zone and found Seider coming off the bench. The rookie muscled his way to the right circle and sent a wrist shot over Tokarski's glove.

Seider, the sixth overall pick in the 2019 draft, is the second Red Wings player - and first defenseman - to score his first NHL goal in overtime. Mud Bruneteau did it on Dec. 14, 1935.

"It's always nice getting a game-winner," Seider said. "But you don't get any more excited for that. It's just one goal. I'm way more happy with the two points tonight, and the way we played."

Suter gave the Red Wings their first regulation lead in six games just 16 seconds after he won the opening faceoff. Bertuzzi passed to Raymond for a one-timer, and Suter jammed the rebound underneath Tokarski's blocking pad at the edge of the crease.

Trailing 1-0, Buffalo took the lead with a pair of goals in a 1:04 span of the second period.

Jeff Skinner set up Thompson's tying goal with 8:28 remaining in the second. Skinner skated past the right side of the goal, spun around and sent a pass between Nedeljkovic's pads to the slot where Thompson lifted a wrist shot into the far corner.

On the next shift, Robert Hagg drew a holding penalty on Detroit's Joe Veleno in the offensive zone, and Dahlin ricocheted his shot from the point off the right post during the ensuing power play to put the Sabres ahead.

Ruotsalainen made it 3-1 when he scored on the rebound from Colin Miller's shot about six minutes into the third.

The Sabres also surrendered a two-goal lead in their 3-2 loss to the Los Angeles Kings on Sunday that started the their current skid.

"It's part of the process of development," Sabres coach Don Granato said. "We know we have to develop as an organization and we're not gonna go anywhere if we don't allow these guys to develop. If we just stronghold them, and play very conservative, and try to win 1-0, we're not going to be any better next month, or in one year."

Buffalo recognized the 40th anniversary of Val James becoming the first Black American to play in an NHL game. Sabres players wore sweaters that honored James during warmups, while tribute videos were shown in the arena before and during the game. Detroit drafted James with the 184th pick in 1977, but never played a game for the franchise.

Red Wings: C Dylan Larkin (personal reasons) did not make the trip to Buffalo and missed his third game in a row. Coach Jeff Blashill had no additional information on his captain's status.

Sabres: Leading scorer F Victor Olofsson was held out for a third straight game with a soft-tissue injury but is nearing a return, coach Don Granato said . G Craig Anderson (upper-body) is day-to-day.

Sabres: Recalled G Aaron Dell from the minors to back up Tokarski and loaned F Brett Murray to AHL club in Rochester.

Sabres: At Washington on Monday.