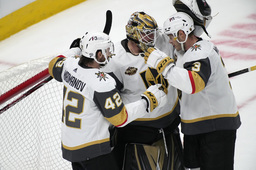 DENVER (AP) Vegas forward Evgenii Dadonov had nothing but open ice and an empty net in front of him.

So he passed the puck back to teammate Keegan Kolesar to get him in on the scoring act. Initially credited with the goal, Kolesar later was given an assist.

Turns out, Dadonov touched the puck before it went over the goal line. No matter. A little fun and games in sealing a much-needed win.

Reilly Smith scored a short-handed goal, Robin Lehner stopped 26 shots and the injury-plagued Golden Knights snapped a four-game slide with a 3-1 win over the Colorado Avalanche on Tuesday night.

Chandler Stephenson also scored and Dadonov added the empty-netter - changed from Kolesar about 90 minutes after the horn - with 29.9 seconds left to wrap up the victory in the matchup between two of the top teams in the West who haven't exactly been playing at their best.

Vegas has a valid reason - injuries to big names.

"We needed a win," Vegas coach Pete DeBoer said. "We committed to defending hard and you need to against that team. We got some timely saves and a couple of big goals. Good formula for us."

The Avalanche just haven't been able to hit their stride so far this season. They dropped to 1-2 at Ball Arena after finishing 22-4-2 in friendly confines a season ago, which was tied for the most wins.

Cale Makar had the only goal for Colorado. Darcy Kuemper settled in after a rough start to make 26 saves.

"We're sort of stumbling and bumbling along right now," Avalanche coach Jared Bednar said. "So there's a there's a level of concern."

The game was stopped for several minutes late in the second period as the officials took a look at a hit delivered by Avs defenseman Jack Johnson on Kolesar near the benches. Johnson appeared to catch Kolesar up high and knocked him to the ice. Kolesar's teammate Nicolas Roy immediately tossed his gloves and went after Johnson.

Right after things were sorted out, Makar scored to make it 2-1.

Colorado nearly tied it with 8:32 remaining on a wrap-around try by captain Gabriel Landeskog. But the stick of diving defenseman Nicolas Hague helped keep the puck out of the net until Lehner could smother it.

The Avs pulled Kuemper with around 1:50 remaining, but couldn't capitalize. That sort of start to the seasonn.

"There's no panic at all," Makar said. "We're (six) games in and we could win the next (76); obviously that's probably not going to happen, but at the end of the day you can think like that. Slow starts happen and we just have to build off it as a team. It just builds character."

Lehner made saves every way possible, including one by sitting down on the puck just in front of the goal after a shot by Sampo Ranta in the second period. Lehner is now 18-8-2 with Vegas in the regular season since being acquired from Chicago on Feb. 24, 2020.

This was an anticipated early season clash after Colorado and Vegas met in the second round of the playoffs last season. The Golden Knights won the series 4-2.

Stephenson scored two minutes into the game and before fans even had a chance to settle into their seats.

Later in the period, Smith stole the puck with the Avalanche on the power play and skated in on Kuemper, who poked it away with his stick and right to William Karlsson. Although Karlsson was originally credited for the goal, it was changed to Smith.

It was Smith's seventh short-handed goal for Vegas.

The Avalanche were without defenseman Samuel Girard after he took a hit against Tampa Bay on Saturday.Bednar said Girard remains day to day.

Devon Toews (shoulder) may be nearing a return. He was recently cleared for controlled contact in practice.

"It's the cards we are dealt right now," Stephenson said of the injuries. "It's tough but I think tonight's a big stepping stone and something to build off."

Golden Knights: At Dallas on Wednesday.

Avalanche: At St. Louis on Thursday.