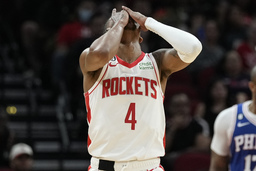 HOUSTON (AP) Jalen Green scored 27 points and Kevin Porter Jr. added 24 to lead the Houston Rockets to a 132-123 double-overtime victory over the Philadelphia 76ers on Monday night as James Harden struggled through his return from injury.

Harden had 21 points but shot 4 for 19 from the field in his first game since Nov. 2. He said he felt good but was disappointed in his performance.

Coach Doc Rivers said Harden, who spent just more than eight seasons with the Rockets before being traded to Brooklyn in January 2021, would be on a minutes restriction in his return. Harden didn't seem to be limited much, and played 39 minutes.

But he said having his minutes monitored in this game made it tough to get in a rhythm.

He added that Rivers didn't want him to play as much as he did in overtime.

"I had to fight to stay on the court just because there was a certain plan in place before the game started," Harden said. "But once you go out there as a competitor you want to try to win."

Harden had missed 14 games with a tendon strain in his right foot. He missed all eight attempts inside the 3-point arc but still got to the line like he always does and made 9 of 10 free throws.

Houston opened the second overtime with consecutive 3-pointers by Eric Gordon and Porter. P.J. Tucker then scored his first points of the game on a long 2 that cut the lead to 123-119.

Porter made two free throws before Harden got Philadelphia within 125-122 with a 3-pointer with about 90 seconds left. But rookie Jabari Smith Jr. added a 3 for Houston to extend the lead to six a few seconds later and Houston held on for the win.

Coach Stephen Silas said finding a way to this one was important for his young team.

"It's huge for our confidence," he said. "Any time that you spend as much time as we do teaching and developing you want to see the fruits of that."

Joel Embiid had 39 points before fouling out late in the first overtime and Tobias Harris added 27 as the Sixers dropped their third straight.

Harden won the MVP award with the Rockets in 2018 and was a three-time scoring champion in his time in Houston. He received a warm welcome from the crowd when he was announced before the game.

Gordon grabbed a steal on a bad pass by Embiid to give the Rockets the ball with 7.5 seconds left in the first OT trailing by one. Embiid fouled out when he knocked down Porter as he drove to the basket after that. The Sixers challenged the foul call, but it was unsuccessful.

Porter made the first free throw to tie it but missed the second and De'Anthony Melton grabbed the rebound, but Harden missed a 3 to send it to the second OT.

The game was tied late in the fourth quarter when Porter blocked a 3 by Harden. Melton grabbed the offensive rebound but lost the ball out of bounds to give the Rockets the ball back with 3 seconds left.

Green had a chance to win it at the buzzer, but his 3-point attempt clanged off the rim.

Rookie Tari Eason, the 17th overall pick in the draft, had 18 points, six rebounds and three steals for Houston. Silas raved about the progress he's made early in his rookie season.

"He's always around the basketball and with that comes more trust and more minutes," Silas said.

Sixers: Open a seven-game homestand Friday night against the Lakers.