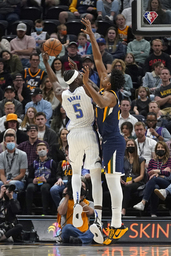 Hassan Whiteside added 15 points and a season-high 18 rebounds for the Jazz. Jordan Clarkson chipped in 18 points, and Royce O'Neale added 14 and five assists.

Udoka Azubuike finished with a career-high 12 points on 6-of-6 shooting in his fifth career start. Utah won its fifth straight home game for the first time this season.

Defense carried the Jazz on a night where they struggled to find their shot.

"We did a good job of guarding them," Mitchell said. "Being able to stick with it and guard, (we were) not letting our offense affect our defense."

The Magic lost for the third time in four games after giving up 24 points off 18 turnovers.

"I think they came out and turned the pressure up," Magic coach Jamahl Mosley said. "And then we ended up just turning the basketball over too many times for transition baskets, easy baskets."

Orlando led just once, but still pushed Utah into the fourth quarter.

The Magic cut the deficit to 83-79 on a 3-pointer from Terence Ross with 9:54 left, but the Jazz did not let it get any closer. Clarkson fed Azubuike for back-to-back alley-oop dunks and then drained a 3-pointer to spark an 18-9 spurt that pushed Utah's lead to 101-88 with 5:12 left.

"They're a playoff team, and that's what those types of teams do in the third or fourth quarter," Carter said. "They play the kind of basketball that's necessary to win."

Orlando finally got on track in the second quarter. Jalen Suggs bookended a 11-3 run with a pair of baskets and assisted two others that made it a two-possession game. His running dunk that capped the run trimmed Utah's lead to 44-39 in the final minute before halftime.

The Jazz made just three baskets over the final nine minutes of the first half. But Utah coach Quin Snyder liked their defense.

The Magic erased the deficit entirely on a 3-point play from Carter that tied it at 54 apiece early in the third quarter. Trent Forrest and O'Neale answered with back-to-back 3-pointers to put Utah back in front 60-54. It was one of three outside baskets for O'Neale during the third quarter.

Azubuike is quietly blossoming into the kind of contributor Utah envisioned when the team selected him with the 27th pick in the 2020 NBA Draft. In his last five games, all starts, Azubuike is averaging 9.6 points and 9.4 rebounds in 22.8 minutes.

His play has elevated the Jazz, who haven't had Gobert for the last nine games.

"I feel like I can really play in this league with my abilities and what I bring to the table," Azubuike said.