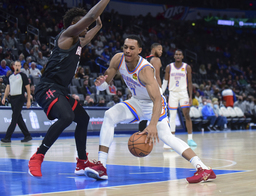 It was Dort's fifth straight game scoring at least 20 points, so Thunder coach Mark Daigneault is no longer surprised by the outbursts.

"I mean, we try not to just have any expectation," Daigneault said. "But it doesn't surprise me because of the quality of a pro he is and how hard he works, how consistent is with his work, his humility to kind of grow through his experiences."

Houston beat the Thunder earlier in the season, and Dort scored eight points on 3-for-9 shooting. In the rematch. Dort made 14 of 22 shots and had the second-best points total of his career.

"Honestly, the first time we played them, I didn't see him play like that," Houston guard Jalen Green said. "I mean, I know he went undrafted. I know he has got that chip on his shoulder. And tonight he brought his game. He was shooting the ball well, getting to the cup, playmaking."

Shai Gilgeous-Alexander had 15 points, nine assists and seven rebounds, and Josh Giddey added 14 points and 11 rebounds for the Thunder. They snapped a two-game skid with their largest victory margin of the season.

The Rockets have lost 13 straight. Houston beat Oklahoma City 124-91 about a month ago for its only win of the season. This time, the Thunder held the Rockets to 35.6% shooting. It was the fewest points Oklahoma City has allowed in a game this season.

The losing is taking its toll on the Rockets.

"I want to say it's challenging," Houston forward Jae'Sean Tate said. "This is why we're here. There are adjustments you just have to be able to adjust to, and at the end of the day, you've just got to go out there and play hard, and today, we didn't do that."

The Thunder opened the game up late in the second quarter to take a 53-41 lead at the break.

Giddey scored six straight points on three baskets to put the Thunder up 65-52 early in the third quarter. Oklahoma City led 80-64 heading into the fourth.

The Rockets scored the first seven points of the final quarter to cut Oklahoma City's lead to single digits.

Houston trimmed the Thunder lead to seven before Dort hit a three as the shot clock expired to push the lead back to 10 with just under seven minutes to play. Dort's one-handed putback dunk with about two minutes to play put the Thunder up 97-87.

The Thunder have rallied for most of their wins this season. This time, the Thunder held off several surges to stay in control.

Rockets: Kevin Porter Jr. sat out with a left thigh bruise. ... made just 12 of 42 3-pointers. ... Danuel House missed all five of his shots from the field.

Thunder: Dort scored 11 points in the first quarter. ... Gilgeous-Alexander had four steals in the first half. ... Thunder guard Tre Mann sprained his right ankle in the third quarter and did not return.

Wood went 4 for 16 from the field Wednesday. In the previous matchup, he scored 31 points on 13-for-19 shooting.

"He's a rhythm player who plays really well in space," Daigneault said. "And if you let him get comfortable, it can be a long night. And I thought, that's kind of what happened (in the first matchup). We couldn't turn the faucet off in Houston with him. And tonight we had a punch on him really early in the game and set a tone that he was going to have to earn everything."

Rockets: At New York on Saturday.

Thunder: At Milwaukee on Friday.