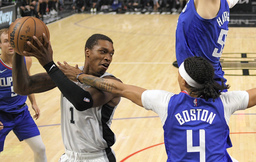 Reggie Jackson overcame a poor start and finished with 21 points to help the Clippers bounce back after their seven-game winning streak ended on Sunday.

"We needed every bit of it," Clippers coach Tyronn Lue said. "He was huge for us."

"We still have to figure some things out, but still too much mishaps that are costing us in these games," White said. "Just try to shore those up and execute a little bit better and try to figure out how to win some games."

The young Spurs kept at it and cut their deficit to 91-82.

Jackson hit consecutive 3-pointers and George scored for a 99-82 lead.

Doug McDermott and Keldon Johnson made back-to-back 3-pointers that again drew the Spurs within nine. Boston scored the Clippers' final five points and finished with 13 to close out the game, playing 20 minutes with other players out.

"I love the kid," George said. "He gives us energy and we need that."

Boston is known for standing the entire game when he's mostly on the bench.

"I'm the youngest so I got to bring energy to these guys," he said.

Gregg Popovich is coaching his youngest roster since coming to San Antonio in 1996. The team's average age is 24.5 years.

"The effort is there. They ae growing, doing little things better all the time," he said. "Frustrating to lose, but when a team is working that hard and willing to learn it's enjoyable as hell even in a loss."

White's basket early in the third gave the Spurs their first lead since the opening quarter. The teams traded baskets before Thaddeus Young scored to tie it at 69-all.

From there, the Clippers outscored the Spurs 14-2 to go into the fourth leading 83-71. After struggling in the first half, Jackson exploded for a quick seven points, a blocked shot and fed Isaiah Hartenstein for a one-handed jam.

The Clippers saw most of their 12-point lead disappear by halftime. The Spurs closed the second on a 13-5 run, including nine by Murray, to trail 57-53 at the break.

Clippers: F/G Terance Mann sat out with a left ankle sprain. ... Justise Winslow was out for personal reasons.

Boston is one of six players featured in "Klutch Academy," a five-part series debuting Nov. 23 on BET.

It follows the players as college prospects preparing for their pro careers leading up to the NBA draft. Agent Rich Paul executive produced the series as part of a partnership with Klutch Sports Group and BET Studios.

"That's going to be a good one," said Boston, who played at Kentucky. "It's going to show the work we put in this summer."

Spurs: Visit Minnesota on Thursday to finish a three-game trip.

Clippers: Visit Memphis on Thursday to open a two-game trip.