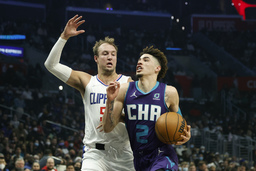 Luke Kennard had 18 points, and Terance Mann finished with 17 points and 10 rebounds. Down 13 in the first quarter and in a nine-point hole with less than seven minutes remaining, the Clippers had a 22-0 run to take a 115-102 lead.

LaMelo Ball, from nearby Chino Hills, had 21 points for the Hornets in their fourth straight loss. Ball played his first game in Los Angeles since a right wrist fracture against the Clippers last March forced him to miss 21 games.

Miles Bridges also had 21 points for the Hornets, and Terry Rozier added 17.

Charlotte got a 3-pointer from Rozier with 7:09 to play, then didn't make another field goal until a layup by Bridges with 1:09 remaining.

Hornets: F P.J. Washington missed his second consecutive game with a hyperextended left elbow. .C Mason Plumlee was in the starting lineup after he was a game-time decision with a left rib contusion but failed to reach double digits in rebounds or points for the sixth-consecutive game.

Clippers: C Serge Ibaka was active for the first time this season following back surgery in June and made his debut 3:52 remaining in the first quarter. He did not score on three shots over eight minutes.