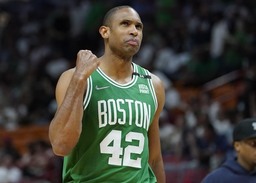 The Boston Celtics went from looking like they were in deep trouble after Game 1 of the Eastern Conference finals to delivering a severe beating to the Miami Heat in Game 2.

The difference in performances by both squads makes Game 3 feel extra pivotal when the best-of-seven series continues Saturday night in Boston.

Miami used a 25-point margin of difference in the third quarter of Game 1 to cruise to a 118-107 victory. But with Defensive Player of the Year Marcus Smart back on the court in Game 2, the Celtics led by as many as 34 while whipping the Heat 127-102.

"We lost a game in the playoffs before," Vincent said. "It's a loss, whether you lose by one or by 20. Go back to the drawing board and get ready for Game 3."

But it was the way the Heat lost that was so alarming.

The Celtics had Smart (foot) and Al Horford (COVID-19 protocol) back after missing the opener and easily responded after falling down by 10 in the first 4 1/2 minutes.

The Celtics' response was so swift and powerful that they led by 29 late in the second quarter. Boston led 70-45 at halftime partially thanks to 12-of-19 shooting from 3-point range.

"I think the sign of a good team is how you respond after losses, especially tough ones," Celtics star Jayson Tatum said. "It just kind of shows the character of the group. We've done a really good job most of the year responding after tough losses and situations."

Tatum scored 27 points but the real difference-maker was Smart, who contributed 24 points, 12 assists, nine rebounds and three steals in 40 minutes. Smart also made five 3-pointers and committed just one turnover while accumulating at least 20 points and 10 assists in a postseason game for the third time in his career.

"There's a different type of energy and feel when I'm out there on the court able to bark out the commands and really get into my guys and get them motivated," Smart said. "It's like, 'OK, if he's going to go out there and do it, I don't want to be the guy that's slacking, so I've got to come with it.' That's the beauty of having me on the court."

Smart helped keep Butler to a quiet 29 points when compared to his 41-point output in Game 1.

Butler said he was trying to do too much in Game 2 and will have to incorporate his teammates into the mix more on Saturday.

"I think I have to do a better job of getting everybody else involved, if I'm being brutally honest," Butler said. "I have to find that fine medium, that fine line in between when to be aggressive and when to make sure that I can get guys open."

Butler has been handling the ball more than usual with point guard Kyle Lowry (left hamstring) out of the lineup. Lowry missed each of the first two games of this series and eight of the past 10 but is listed as questionable for Game 3.

Miami sustained another blow when veteran power forward P.J. Tucker departed in the third quarter with a left knee contusion. Tucker is tabbed as questionable for Saturday.

On Saturday morning, Heat coach Erik Spoelstra said both Lowry and Tucker will go through their routines with the intent to play in Game 3.

Spoelstra said the team used Friday's off day to determine a response to the lopsided Game 2 result.

"That's definitely part of the process in the playoffs," Spoelstra said. "You get to this point of the conference finals, you just have very good teams. You have teams without many weaknesses. It's great competition."

Boston coach Ime Udoka insisted after Game 1 that his team played just one bad quarter. He wasn't surprised with the turnaround.

"I think our guys have bounced back really well all year, especially in the second half of the year," Udoka said. "I think, obviously, adding Marcus and Al back gave us a little boost. But our guys have pride and looked at a golden opportunity that we kind of lost and thought we could do much better, and we did that."