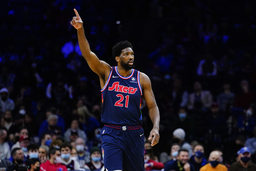 Joel Embiid continues to make a strong case for the Most Valuable Player award.

Embiid had 42 points, 14 rebounds, four assists and four blocked shots as the Philadelphia 76ers defeated the New Orleans Pelicans 117-107 on Tuesday. It was his sixth game with at least 40 points and 10 rebounds this season.

Embiid will look to continue his dominance when the Sixers host the Los Angeles Lakers on Thursday night.

"Great player playing really well, really focused, being a great leader for our guys," Sixers coach Doc Rivers said of Embiid. "At halftime, he's the first guy who raises his hand, 'It's on me, it's on me, I've gotta play better defense. I mean he's just been very good; it's great for me."

Embiid has at least 38 points and 12 rebounds in four straight games, the longest streak in franchise history. He is averaging 29.0 points, 10.8 rebounds and 4.3 assists per game for the season.

With Ben Simmons sidelined all season for personal reasons, Embiid has elevated his level of play to an all-time high.

"(Embiid's) fighting every game, and he's going out there and trying to do whatever he can to help the team win and he's playing all the games, too," Tobias Harris said. "You know, he's going and it's a long season and we have a lot of games and that's a big guy out there playing like a guard. The moves he makes and the plays he makes out there is really impressive."

Harris had arguably his best game all season with 33 points and 11 rebounds against New Orleans. Earlier this season, he struggled while being booed by the home crowd.

He seems to have reversed the trend.

"You can feel him getting back to the pace of last year, which is important for us," Rivers said.

The Lakers, who have won two of their past three games, will look to maintain their momentum with the return of Anthony Davis.

Davis had missed the previous 17 games with a sprained left knee, but he provided a lift with eight points and four blocked shots in 25 minutes of a 106-96 victory over the Brooklyn Nets on Tuesday.

"For the most part, I felt fine. I felt great out there," Davis said. "The first couple of minutes, the adrenaline took over and after that, kind of went away and the wind caught up to me. When I got my second wind, I was fine for the rest of the game."

Simply having Davis' presence on the court changes the dynamic for the Lakers.

"He really changed things for us defensively at the rim," Lakers coach Frank Vogel said. "His anchor to our defense is something that has been sorely missed."

The Lakers will go as far as LeBron James can take them this season. That's not exactly a secret.

Even with Davis out, the 37-year-old James has been consistently stellar.

James scored 33 points against the Nets, the 18th straight game he has compiled at least 26 points.

"I just basically told myself, 'Nothing else matters besides what you do out on the floor and how you continue to lead these guys,'" James said. "It doesn't matter the conversations that are going on outside the locker room and the narration of our ballclub or whatever else is going on.

"Nothing else matters besides what I bring to the table every single night. How positive I can continue to lead these guys, no matter the outcome."